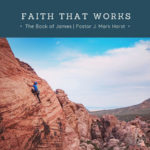 The Voice of Hope
You’re Going to Do What?

In 1912 the Titanic was launched in Liverpool, England. It was proudly announced by the ship builders and owners that this vessel was “unsinkable.” So haughty was the rhetoric surrounding the Titanic’s safety and structural integrity that it caused great anxiety in the heart of one God-fearing woman. After reading the shipbuilders’ claims, Mrs. Hart believed, and stated, “This is flying in the face of God!” You can imagine her consternation when her family was unexpectedly transferred onto the gigantic liner for its maiden voyage.

Click the play button above to hear the rest of the story and Pastor J. Mark’s teaching from James 4:13-17.

The Anchor of Truth