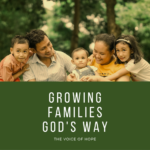 The Voice of Hope
Women As Mothers : Part 2

The final PART of the Pattern is,

In verse five, Paul says the older women should teach the younger ones to be “homemakers.” The literal meaning is, “those who stay at home,” and carries the thought of being domestically inclined; having a desire to create a home and to use it as a primary point of ministry and service. This is a special challenge in our day when motherhood is viewed as an inferior choice my many and an illegitimate choice by radical feminists!

Years ago, and some of you may remember this, the Chrysler corporation had billboards advertising their minivan which read; “Who was the idiot that coined the phrase, ‘Stay at home mom?’” Those billboards made me angry! I know what the company was trying to communicate; they wanted to sell their product. But the terminology used, whether intentional or not, just reinforced the idea of moms being second class. Nothing could be farther from the truth!

I fear the culture around us has had more influence on us than the Scripture itself. The materialistic worldview of our culture has seeped into the church. For many people things have become more important than relationships. Many couples claim they can’t afford to have and raise children, but my observation is, that’s an excuse more than a reason. Often, those same people spend outrageous sums of money on pets or some other thing of much lesser value.

In ancient Israel, God condemned the idolatry of the people and how they sacrificed their children to the Canaanite god, Moloch. We are tempted to look at them with disdain and say, “how foolish, we’d never do such a thing.” Yet today, little children from Christian homes, whose lives should be primarily shaped and molded by the care of their mother, are shuttled off to daycare and “sacrificed” on the altar of career or possessions. Or they’re plunked down in front of the widescreen to watch some video concoction of a humanistic expert who says this will make them miles ahead of their peers when they begin school. I tremble because I know God will not overlook our carelessness and disobedience.

Mothers, what greater impact could you have on the culture than to raise godly sons and daughters – as many as the Lord decides to give to you and your husband? Don’t send your children off into someone else’s care so you can minister to another group of people. Make your children your primary ministry and show them by your life and example how to reach out to others. Let God develop your ministry in your home. When you’ve been successful there, He can expand it far beyond what you’ve ever dreamed.

I will admit, there may be some cases where a mother with young children must work outside the home, but that’s not the ideal. If you’re a single mother, you may have no choice. But even there, I believe it’s part of the extended family’s responsibility, and the local church fellowship, to help you. That way, your time spent away from home is kept to a minimum. Most people I know who feel that the mother must work outside the home in order to “make ends meet,” just need to trim the “ends” a little shorter so it’s not so hard to make them meet. By reducing what we must have to real needs, instead of wants, it’s possible to live on one income. One of the positive effects of the Covid pandemic is that it brought many mothers back home from the workforce and many are now choosing to stay at home.

I can testify to this personally. The Lord blessed Joyce and me with eight children and through those child rearing years, God provided for our needs on one income. Sure, we’ve done without some things we’d have liked, and our children didn’t have all the “stuff” many of their peers had, but I really don’t see that we’ve suffered any lasting damage.

I don’t say this to elevate my wife and me, because it is only by God’s grace that we’ve made those decisions. But we’ve attempted to give our children the priority God’s Word gives to them and God has honored that commitment. He will do the same for you, and for anyone who follows His principles. I encourage all mothers to follow God’s pattern of being a “homemaker.”

Next, Paul says mothers should be good, that’s an emphasis on good character that comes from the inside out. Agathos means joyful, happy, agreeable, and pleasant. Mothers who concentrate on filling their God-ordained role will develop godly character. They will serve their husbands and children unselfishly, with a loving heart. They will cultivate a meek and quiet spirit. They will be gentle and kind. They will provide a godly role model for sons and daughters. And they will have the joy of seeing their children walk in truth. God will give them eternal rewards for their obedience.

Finally, Paul says the older women are to teach the younger ones to be obedient to their own husbands. It is important to note that the Greek here is hupotasso. This isn’t the exact equivalent of our English word, obedient. It is to be understood in terms of God’s taxis or ‘order.’ It is the responsible acceptance of a relationship in which God has placed one, and the resulting honest attempt to fulfill the duties which it imposes on one. What a powerful principle this is! A woman who willingly and cheerfully takes her place under divinely appointed authority will experience the approval and blessing of Almighty God. Her children will, in the words of Solomon, “rise up and call her blessed.”

Dr. Thomas Constable says, “Loving in this way involves unconditional acceptance. Wives need to accept their husbands as they are, namely, as imperfect sinners like themselves. This acceptance should not depend on the husband’s performance but on his worth as a good gift God has given to the wife. The wife needs to accept her husband’s thoughts, feelings, decisions, and failures. Love is active, not passive. It is something we do. Love involves listening because listening says, “I love you and I care about you.” Loving a husband involves a wife accepting her lifestyle that results from her husband’s schedule. It involves protecting him from criticism in public as his ally rather than criticizing him before others. Love involves committing to a mutually fulfilling sexual relationship and sometimes taking the initiative for his pleasure.”

Maybe some of you are saying to yourselves, “I thought this teaching was about women as mothers.” Well, listen to Dr. Constable’s last statement; “The best thing a couple can do for their children is to love each other unconditionally.” And by the way, we did talk to husbands in an earlier message about loving their wives unconditionally.

You know, I believe it is important for us to recognize the context in which Paul was giving this teaching to Titus. Titus was a church leader on the island of Crete, and the Cretans were notorious for their idleness and corruption. Paul quotes one of their own who said, “Cretans are always liars, evil beasts, and lazy gluttons.” So that environment is going to affect the church.

Again, I quote Philip Towner. “The values of the ‘new woman’ [style of conduct in Crete] had little to do with traditional commitments to the household; the new morality they emphasized endorsed the freedom to pursue extramarital affairs and liberties normally open only to men, which would place marital fidelity and household management at risk. Thus, the household was the chief theater of Paul’s campaign.” That sounds pretty contemporary, doesn’t it? The home and family are chief battlegrounds today in preserving God’s heritage.

Let’s contrast the prevailing world view of motherhood with the Scriptural view presented here. These comparisons were presented at a “Family Life Conference.”

Then notice the final words of this verse. All these things we discussed today are to be done “[so] that the word of God [is] not blasphemed.” What does that mean? It means that the sacred Word of God will be treated casually, as a thing of little importance. If those who profess to follow Jesus do not live out their claim to faith, and especially in these areas we looked at today, the world will give little or no weight to the things of the Lord. We’re seeing that today, aren’t we?

I believe that the prevailing attitudes of our culture about children and family are a direct reflection of the failure of many in the church to embrace God’s plan for marriage and family. But how grateful I am to God for the righteous remnant He is raising up in our day; mothers and fathers who are fully committed to practicing family life according to the principles of God’s Word. Marriage partners who are fully and unconditionally committed to each other, welcoming the children God chooses to give them, making their home a priority and a center of ministry in their community. Only God knows their impact on our culture in the days and years to come.

If you’re paying attention, you know that birth rates in the western world are declining quickly. We are already experiencing the economic and social effects of this. Christ followers who practice God’s principles for marriage and embrace children may have an outsized impact on the future of the culture and the world. They may experience a unique application of Jesus’ promise that “the meek will inherit the earth.”

I believe the Bible teaches us that a mother’s greatest influence on her world is accomplished through the training of her children. I pray that God will reward all the mothers listening today. And I offer special encouragement to those young mothers with several little ones; the mother who seems to get little more accomplished than caring for her children and the needs of her husband.

Sometimes you may feel like your life is just going in a circle, like it doesn’t count for much. When you have those feelings, let me urge you, just go look at that precious little one sleeping in the crib. Or take that little chubby face, smudged with remnants of lunch, between your hands, and look into the face of Jesus Himself. For it was He who said, “whoever gives one of these little ones a cup of cold water in the name of a disciple, I say unto you, he shall in no wise lose his reward.” Mothers, remember, you are impacting both the present and the future. There is no higher calling. God bless you; you will have a righteous person’s reward!

As we close, let’s recap the three parts of God’s pattern for motherhood that we’ve looked at in this teaching.  First, your role as a mother is providentially assigned whether young or older. Not every woman has this special privilege. The second part of the pattern for you as a mother is to be morally refined; to demonstrate godly character from the inside out; to be thoughtful and modest in your appearance and actions. The final part of the pattern is God’s call for you to be domestically inclined, a “homemaker.” May God bless with an understanding of His Word and a heart that is willing to walk in obedience to that understanding.

Well-doing is the Will of God