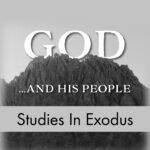 It is good to be with you today. Thanks for joining us as we begin our study in Exodus. This is our first lesson from this OT book and as God led the children of Israel day by day, we also look for God’s guidance each day and trust Him for it. We are Heralds of Hope, and we believe every book in the Bible is inspired by God and will give us a better understanding of Him and His plan for us. This belief leads us to prioritize Scripture in all we do. This starts inside on a personal level, then it works its way out in many of our day-to-day choices. Teaching His Word and sharing it via radio is one result of our view of Scripture.

Today we begin in Exodus 1, and the title is, Dealing with Threatening Conditions. It is a closer look at Pharaoh and what made him respond like he did to the children of Israel. We thank God that He is over all people and events, no matter what happens here His purposes will not be derailed His plan will prevail.

Turn to Exodus 1, if you can, and give your attention to Pastor J Mark as we begin our study in the book of Exodus.

What do people in authority do when they are faced with threatening conditions? Presidents, Prime Ministers, dictators, and petty tyrants use all kinds of means to protect themselves. They give money to powerful people in business or government; they hope the money they give will protect them and buy loyalty. Others become very brutal and slaughter people by the hundreds of thousands to protect themselves.

Why do leaders act that way? It’s because they are filled with fear, fear deep in their spirits. They are afraid someone will overpower them and take their place. Then they will lose all their power and privilege. So, anyone who is in their way they will treat with contempt. In Exodus 1:8-22 we have the account of how one king responded when conditions threatened him.

8.  Now there arose a new king over Egypt, who did not know Joseph.

9.  And he said to his people, “Look, the people of the children of Israel are more and mightier than we.

10. Come, let us deal shrewdly with them; lest they multiply, and it happen, that, in the event of war, that they also join our enemies, and fight against us, and so go up out of the land.

11.  Therefore they set task masters over them to afflict them with their burdens. And they built for Pharaoh supply cities, Pithom and Raamses.

13.  So the Egyptians made the children of Israel to serve with rigor:

14. And they made their lives bitter with hard bondage, in mortar, and in brick, and in all manner of service in the field. All their service, in which they made them serve, was with rigor.

15. Then the king of Egypt spoke to the Hebrew midwives, of whom the name of one was Shiphrah, and the name of the other Puah:

16.  And he said, “When ye do the duties of a midwife to the Hebrew women and see them on the birthstools; if it is a son, then you shall kill him: but if it is a daughter, then she shall live.

17.  But the midwives feared God and did not do as the king of Egypt commanded them but saved the male children alive.

18.  So the king of Egypt called for the midwives, and said unto them, “Why have you done this thing, and have saved the male children alive?

19. And the midwives said unto Pharaoh, Because the Hebrew women are not like the Egyptian women: for they are lively and give birth before the midwives come to them.

20. Therefore God dealt well with the midwives: and the people multiplied and grew very mighty.

21. And so it was, because the midwives feared God, that He provided households for them.

22.  So Pharaoh commanded all his people, saying, “Every son who is born you shall cast into the river, and every daughter you shall save alive.”

From this Scripture, we learn the two basic TACTICS men of power will use, so be forewarned, and take hope.

Look at the text again and you will see quickly that King Pharaoh responded like kings do.

Their first TACTIC is, They Use Oppression

Pharaoh wanted to keep the children of Israel in the land because they were performing a valuable service as his slaves. So, he counseled his people and said, “Let us deal wisely with them.” He wanted to keep them because he said if war should happen to break out, they might indeed join our enemies and fight against us and escape out of the land. He aimed to build some kind of restraint around these people to keep them in the land.

Pharaoh wanted to use the skills of the Hebrew workforce, so he set over them taskmasters, and had them build two important treasure cities, Pithom and Raamses. He wanted their building skills to make a monument for himself. So, he ordered these cities built. I am told there are still some ruins in Egypt which look very much as though they had been these two cities.

Pharaoh made life bitter for these Hebrew slaves. They served with rigor. The Hebrew word means ruthlessness, brutality, and violence. Their supervisors were extremely cruel. And verse 14 tells us the Egyptians “made their lives bitter with hard bondage, in mortar, and in brick, and in all manner of service in the field.” They made them work extremely hard. They denied them the comforts of life. They had barely enough to exist, no doubt.

There are those today who use the same tactics. It is an effort to make people submit.

You know, Satan is also a leader who uses oppression. But he’s a deceiver. He makes things look pleasurable, even inviting, on the surface. But he does it to bring people into bondage. He is a cruel taskmaster. He wants people to keep on serving him and helping to build his kingdom. And if you try to escape his kingdom, he will do all he can to make your life hard and bitter.

It is a pity that some, looking into those conditions, do not really see the truth. Pharaoh went beyond oppression and used a second tactic which is,

II. They Use Suppression

If oppression will not work, then suppression must be employed. Pharaoh commanded the midwives to kill all the boy babies. He said to them, “When you do the office of midwife to the Hebrews and see that a son is born, you are to kill him.” In other words, do away with him. Don’t let the mother know. Just kill him. He wanted to suppress the growth of the male population.

There are leaders today who decree the murder of their opposition. Just wipe them out, do away with them, and get rid of them in any way possible. Reports are coming from certain countries where this is practiced today—the use of suppression. One way is through forced abortions. Certain genders or ethnicities are aborted to preserve the power of a particular race.

We have global leaders today in government, academia, and big business who insist that our world is overpopulated. They see people as the problem. So, they embrace abortion on demand under the euphemism of “family planning” and export that ideology to the developing countries of the world. But their real goal is simply to preserve the power they have and to continue their lavish lifestyles. Ultimately, like Pharaoh, they will face the judgment of God!

God will not be mocked. You cannot disobey His commandments and hope to escape the consequences. There are numerous passages of Scripture that warn humanity of trying to escape God’s judgment on their disobedience. Pharaoh had to learn this the hard way.

Pharaoh commanded the midwives to kill all the boy babies or to drown them in the Nile River to get rid of them. There was no thought of pity or mercy. His only thought was to preserve his position, so he was willing to use this extreme kind of violence to destroy the baby boys. He thought he had figured out a foolproof way to get what he wanted.

But his plan didn’t work because the midwives feared God, they obeyed His laws. They risked their lives to defy the order of the king! They refused to do what the king of Egypt commanded them. Instead, they saved the male children alive. They understood where the source of real power is. And because they feared God like that, He rewarded them. The text tells us that God gave them families. He honored their faithfulness to Him by giving them children of their own.

It is encouraging to know that even today some refuse to cooperate with this kind of suppression in various countries around the world. They refuse because they understand that God’s law is the highest authority. They care for children who survive abortion or are abandoned at birth. They hide Christ-followers from godless authorities seeking to arrest them. They care for the disabled and the disadvantaged. They see all human beings, regardless of race or ethnicity, as valuable because they are made in God’s image.

When the godless powers face threatening conditions, there is no limit to their evil actions as they try to preserve that power. But those who look to God will risk their lives to be honest and true to Him and to all people. So, take heart, the schemes of men and Satan will not succeed. God will deliver the righteous either from threatening conditions or through them. Amen!

Thanks, J Mark, for this teaching from Exodus and thank you for joining us. It is a privilege to study God’s Word and grow in our walk with Jesus. Now let’s take what we’ve heard and allow it to affect our lives. Jesus tells us about a wise man and a foolish man, the difference between these two was the wise man put what he heard into practice. The foolish man did not change his ways. Let’s be like the wise man don’t be foolish.

We bless you as you follow Jesus and put His teaching into practice. If you have any questions or if you would like today’s teaching, please contact us and ask for it by title or passage. We also have a study guide available designed to help you learn more from each of these lessons in Exodus. It is called the Hope Herald and if you would like one, we would be happy to send you one.

Here are a few ways you can reach us. The quickest and easiest way is through email. Our email is [email protected]. If you don’t have email, you could send us a letter, send it to Hope for Today, Box 3, Breezewood, Pennsylvania 15533. Another way you can contact us is through our website. Our website is Heraldsofhope.org. While you are there, please look on our website for this teaching and other similar teaching. There you will also find other resources available from Heralds of Hope. Again, the website is www.heraldsofhope.org.

We thank you again for joining us for today’s program. I encourage you to join us again next week as we continue our journey through Exodus. We look forward to being with you then and will leave you with this thought from I Tim, “But you, child of God, pursue righteousness, godliness, faith, love, endurance, and gentleness. Fight the good fight of faith.”

This episode is an exposition of Exodus 1:8-22 by J. Otis Yoder, re-recorded by J. Mark Horst, with a new opening and closing by Arlin Horst.