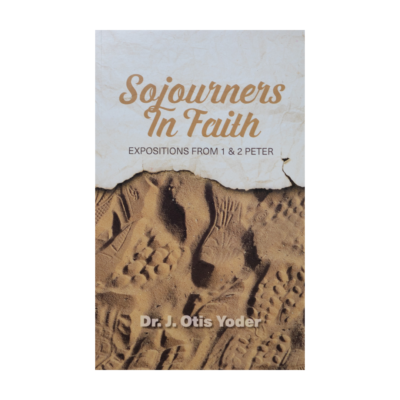 “Beloved, I beg you as sojourners and pilgrims, abstain from fleshly lusts which war against the soul…” (1 Peter 2:11)

The epistles of First and Second Peter were written to Christians facing the crucible of suffering. They needed to know how to respond in a Christ-like way and faithfully endure.

Sojourners in Faith contains Dr. Yoder’s clear expositions from these two epistles. With an updated font for easier readability and an attractive new cover, we recommend this book to you for your encouragement and blessing.

John Otis Yoder was born the seventh child to homesteaders in Colorado in 1914. When he was two years old and very sick, his parents dedicated him to the Lord. One year later the family moved Midland, Michigan, where he grew up, was baptized at 11 years, and ordained to the ministry at 23 in his home church. In 1939 he and Isabelle King were married and became parents to a son and a daughter to which are now added numerous grandchildren and great-grandchildren.

Dr. Yoder earned academic degrees at Eastern Mennonite College, Goshen College, Faith Theological Seminary, and in 1954 the Doctor of Theology degree at Northern Baptist Theological Seminary. He taught at Eastern Mennonite College and Seminary for 15 years. Greek was his priority. His first sabbatical was spent teaching in Jerusalem, and traveling extensively in Bible Lands which led to their hosting 20 seminars from 1969 to 1989 as Hope Bible Lands Seminars.

In 1967 the Lord called him to change the four walls of the classroom for the world. He entered radio evangelism in 1968, founding Heralds of Hope, Inc.. In cooperation with Trans World Radio, Pan American Broadcasting, and other partners, his messages minister around the world in 13 languages.